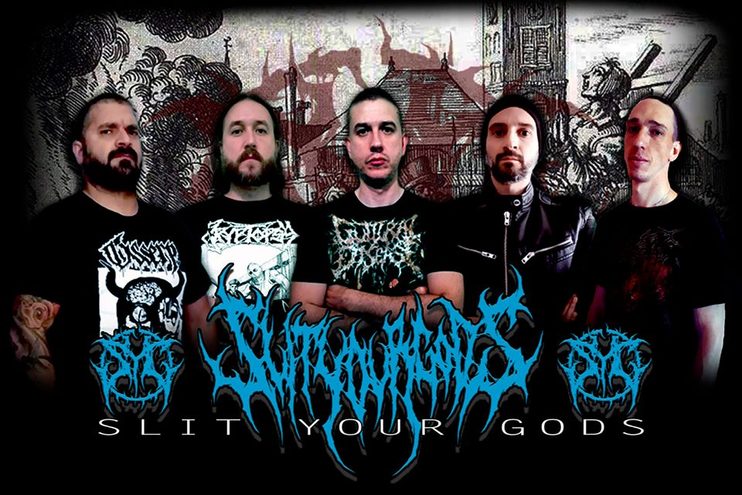 «We wanted something of our own, unique, a blasphemy and mean entity»

Today, we have the pleasure to speak with the band Slit Your Gods, a new Death Metal formation. They have released their debut EP «Dogmatic Convinctions Of Human Decrepitude» for whom we did a review, that you can read (in spanish) at this link.

Let´s begin with the origins of the band. What were the first steps and how was the “selection process”, so to speak, the recruitment process?

Jordi: Hi, well, it all started with a Youtube clip posted to Facebook by Rod. The clip showed the band Cryptopsy and Rod mentioned his idea to créate a studio Project in the style of the Canadian band´s first albums. From then on we added up the rest of the members, it happened fast, and in some two days we were all set up. Rod was the “instigator” and the one who chose. This said we want to stress the fact that Slit Your Gods was born as an independent Project, individual, not just meant as a copy of Cryptopsy, some might say, what the hell, they sound so different, we wanted something of our own, unique, a blasphemy and mean entity.

We would like to know a bit more in depth about each member´s musical background, and technical details.

Jordi: Ok, let´s start with our drum guy, Roman, a beast. Roman comes from Perm, in Russia, and has extensive experience in extreme bands and mostly Brutal Death, for example ByoNoiseGenerator, Ineffable Demise, Psychopathic, Esophageal, Lethality… and some others as sesión drummer.On the bass guitar we have Oscar from Albacete, living in Motilla, also having played for the likes of Foetidus, Scrumptious Putrescence, Arthropodal Humanicide, Obesus Sperpentus… On guitars there´s Rod, brother to Oscar, Albacete-based, with projects like Cadaverized Ferocity, Foetidus, Slashing The Slammers, Scrumptious Putrescence, Putreseminal Viscosity, Obesus Sperpentus, Arthropodal Humanicide… Another guitar is Santi from Soria, known for his solo Project Sad Eyes, who has made a name for himself in the national scene. Finally I am singing, I am Jordi, from Manresa (BCN) and I also sing with Avgrunn, still active, and other defunct projects, like Fall Of Mankind, among others.

Slit Your Gods is quiet a Death Metal band name indeed. What do you want to transmit or what statement do you convey with this name?

Jordi: It came up from a Cryptopsy track “Slit Your Guts” and Oscar changed it to “Slit Your Gods”, blasphemy and boom, we found a name, some others were considered, but we did love this one! Our band concept is precisely this one, saying Fuck off to God, to their dogma, their faith, their institutions and fan club! (laughs)

And the album title, “Dogmatic Convinctions Of Human Decrepitude”?

Jordi: This talks more or less about decaying and losing yourself when you are blinded by dogma, following a pattern, not questioning the truth or reality, even harming others or yourself, just by following someone else´s dictates but your own. In our article about the record we mentioned Death Metal as the main style. I sporadically listen to Death, so might lose some details, unlike more die hard fans.

Kindly tell us what other styles we could find there, or tendencies we will find in your EP.

Jordi: We play Brutal Death, a Death Metal sub genre, heavier, dense, fast, crazier. It is true that some times we will dwell into Old School and some Death, but we still sound like Brutal Death.

Lyrics, what can you tell us about them?

Jordi: They verse about the atrocities commited by religión through the years. From the Holy Inquisition, the obscure perversities of many priests which have been accused of paedophilia, the blindness and fear imposed on people using God, its pardon, the final judgment and all that garbage they tell!

When composing for instruments, who is usually “in charge”? Is it a team work Project, or do you guys brainstorm?

Jordi: Oscar, Rod y Santi will compose, Santi possibly a bit more, because of his experience, since he is only playing with Sad Eyes, he can get some more spare time. But is it usually the three of them, sending the tracks with a programmed drum base, so that I can go about setting up the vocal lines, lyrics, etc.. And the rest of the instruments, each one from home. Later Roman will include his signature drum playing, record it and send the track back.

The mixing is taken care of by Santi Gzlez. Is this a way to make the tracks more “unique” or personalised? Or is it a matter of economic resources?

Jordi: A bit of both, we wanted our own sound and style but anyway this was meant to be our first EP, a showcase to the world of what we can do, as we were initially a studio project which meant we could not play or tour so we had no income there in sight, and thus Santi proposed he could take care of the mixing and master. On top of that the pandemic arrived and that was it.

Santi: Of all the tracks we were composing I was editing and mixing just to get an idea of how it would result in a studio setting, in order to get a glimpse of what the tracks could look like. My colleagues liked these rough mixes and we then decided I would work on them for this EP. Quite a challenge for me, but hey, I enjoyed it (laugh)

Next two questions go for you, Santi, widely known in Dioses del Metal for your personal project SAD EYES. First off, what made you decide to get involved in this new project? And second, a wild guess we could say, but do you see yourself in the near future in a non-death metal band?

Santi: When I saw the ad Jordi was telling you about I did not hesitate for a second in contacting Rod to see if there was a spot for me. Needless to say I am into studio projects, but also when I found out about the band that would be influencing the whole project, even better, but finally when I saw my colleagues mastery I couldn´t say no. It is a step up in my ladder, I am not quite used to being involved in such brutal stuff, although this is the style I dig the most lately, so nothing could go wrong (laugh).

As for the second question… not now actually. When I was part of Rex Devs. I could easily see me as a more versatile player, I could dare say death metal was not really our thing, and I was surrounded by people who was more into metal than extreme metal, but that has changed now drastically. Got no time to lose now, and I just do what makes me feel more passionate about, and this is extreme metal now. Specially brutal death and technical death. No one can tell what the future brings, but now I do not see myself playing something that is not death any time soon.

What plans we have for Slit Your Gods? There will be a new EP or maybe even a LP?

Jordi: Of course, in fact some tracks we have already finished composing, we have set it asied for a while in order to promote this one, but asap we will get down to it.

Jordi: Actually yes, also from Comatose Music, our record label, they are working hard in promotion, showing us to different companies that use Social Media. We have been overwhelmed by reviews, interviews, Facebook likes and posts and the like and this helps a lot, just because we have been so everywhere we hope you will not forget our fucking name, then it´s worth it.

Setting aside the studio questions, let´s talk general news now. How does Slit Your Gods cope with COVID-19?

Jordi: For us it is great, we have been binge drinking MMS y CDS, and considering we drink like an Irish sailor, this has resulted our bodies cannot get any disease whatsoever!! Jokes aside, being confined actually worked for us, as in this time we did the mastering and mixing, the álbum cover, and label searching and that is how we found Comatose Music, which we are very happy to work with.

Just looking at the desolate Spanish music scene it is easy to imagine what the rest of the world offers. I always devote a certain space in the interviews to address future gigs, etc… I sincerely do not know what to ask now… How do you see the music industry now (politics aside…)

Jordi: Well it is quite complicated, specially for underground bands like us, small venues and small promoters, everyone suffers. Larger venues too, but smaller ones are fucked and possibly will call it quits. This who can promote open air fests can get some benefit, but health protocols and all would make it almost imposible. I am from Manresa, a 40 minute drive from Barcelona… In Barcelona some venues are offering local bands concerts, for half the size, and then play again so that the second half can get in and everyone gets a piece of the pie. No one will bring more famous or expensive bands, with the protocols, social distancing, etc… it is crazy!

To wrap up the interview, would you like to pass on some info to your readers, or send a message?

Jordi: Obviously we want to thank you for the interviews and the chance to showcase our band, also thank the readers of Dioses del Metal and eveyone who follows the underground scene and help us in one way or  another. We want to invite you to listen to us through the available platforms and websites and follow us and specially suport us by purchasing our EP and T-shirts that you can find online at www.facebook.com/slityourgods or through Comatose Music or the rest of the distributors who will possibly offer our shit!